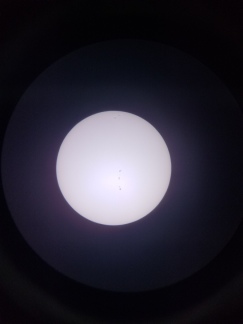 For the past four months, whenever anybody caught a glimpse of the solar system tattoo on my right arm, they would all ask me the same two questions: “So, you like space? Are you excited for the eclipse?”

I spent the summer at school. I had three jobs for most of it (for a brief period I had four), and it didn’t feel like summer at all. In addition to working at Menard’s, working as an office administrative assistant for the Chemistry and Geosciences department, and doing planetarium shows on the weekends (and then Bear’s Training Camp for three weeks), I was still maintaining social media for the planetarium. I created and scheduled posts about the history of eclipses, and how ancient civilizations interpreted and understood them. My focus – everybody’s focus – was getting the community ready and excited for the total solar eclipse on August 21.

We changed our public show schedule to try to get more people through our doors. Instead of scheduling shows every two weeks and changing the show every month, we did the same show, about eclipses, every Saturday night. That’s twelve Saturdays, with two shows a night. I saw the same show at least 30 times throughout the summer, once I include private shows requested by various community groups or camps and the extra shows we added to our weekend shows the week before the eclipse.

I can probably quote the entire show word for word. I know I can hum the music, because it still sometimes gets stuck in my head. But it was so worth it.
This is my passion. It still throws people off when I say I’m an English major who loves space and who works in a planetarium, but that’s okay. I began planning for the eclipse last October. I requested off of work and texted my sister telling her to clear her schedule too, because I was going to stay at her house.

Back in March, or maybe April, the planetarium director, Dr. Stephen Case, began organizing an eclipse expedition. He reached out to faculty and administration and reserved a few buses for a group to drive down to a church in Murphysboro, Illinois, on August 21. Murphysboro is just outside of Carbondale, which was the point of longest totality, so we knew it was going to be a popular place to be. Dr. Case had contacted the pastor of that church to reserve the parking lot in August, a year before the eclipse. We’re nerds, what can I say?
Another operator, Emily Rull (who just so happened to be my summer roommate) was just as excited. She spent her summer doing research and observations for her Honors Program research project, but at nights and at our planetarium shows, she and I would talk about how we hoped the weather stayed clear, and that more people needed to come to our shows, and how we sometimes heard people joking about how they didn’t need or want any eclipse viewers and how we wanted to just smack them in the face and EXPLAIN THAT THEY NEEDED THEM AND THEY WERE VERY IMPORTANT.

We never did that. But the three of us (Dr. Case, Emily, and I) did go to the Kankakee Farmers Market twice to hand out eclipse viewers for free. In total, we handed out at least 2,000 viewers. We ran out our first day there, in July, so Dr. Case ordered another thousand for our next visit in August. I wasn’t able to go to our second farmers market visit, but I heard that we ran out in less than two hours. There was reportedly a huge line of people stretched through and around the farmers market of people who were there specifically for our eclipse viewers.

As the eclipse drew nearer and nearer, more and more people kept asking to buy eclipse viewers, and we started to get nervous because our supply was dwindling fast. Some friends at Menard’s approached me to see if I could snag some viewers for them. Many people involved with schools, summer camps, group homes, or churches kept calling trying to order viewers in bulk. In the last three days before the eclipse, I got at least 20 phone calls every day of people asking the same question: “Do you still have eclipse viewers?”

That question grated my nerves more than I ever thought any question could.

The last two weekends of our public shows completely sold out. We aren’t a large planetarium, with only 50 seats, but I have only worked maybe three other shows that have completely filled up. These shows were actually over capacity. Once all of the seats filled up and we still had a line of people stretched halfway around the planetarium, we began letting people stand in the back and sit on the floor. We did what we could to get as many people as prepared as possible.

And it all paid off.

I drove down to the St. Louis area the day before, to stay with my sister. Her house is about an hour and a half from Murphysboro. I met the Olivet group at the church the next morning, and for two hours we just waited. It was hot as Hades down there, but it was a perfect cloudless day. I was restless, and paced the parking lot taking pictures for social media and looking through the telescope to track the moon’s movement and laughing at my sister who was laughing at my restlessness.

We had no control over what the sun and moon were doing in the sky. We couldn’t control the clouds, or the temperature, or the thousands of other people in southern Illinois that day. But when the moon completely covered the sun and it became night at 1:18 in the afternoon and we could see the corona and we could see the stars – I cried. Emily and I laughed and hugged and applauded, along with everyone else watching. Our hard work over the summer paid off, sure. But it was such a blessing to be able to actually witness something like that for the first time.

And in seven years, we’re going to see it again.